I’ve spent the last couple of months reading from my lists with Joe (on disability studies) and Mark (on writing program administration). I’m now starting to dive fully into Jason’s list, which explores cognitive impairments, literacy, and academic life from a range of perspectives including educational theory, neuroscience, and memoir. It’s my most challenging list, partially because it takes in so much and tries to define a topic that doesn’t yet exist: academic disability. I won’t talk much about that here, but I want to reflect briefly on what the next few posts will explore–to set my sights and size up my target.

One strand I have already read but not yet blogged about comes from composition/rhetoric researchers working in the 1970s and 80s with cognitive models of writing. Here I have Mike Rose’s articles about writers block, cognitive reductionism, and language of exclusion. I also looked at Flower and Hayes’ article version of the cognitive model of composing, which I will eventually follow up with one of their book-length studies. These compositionists don’t think much about learning disabilities, but they do employ clinical models of the mind in the course of wrestling with academic challenges — an approach closely aligned to disability in ways I will discuss in future posts.

I have also been working through some works from the Learning Disability field, both from psychology and neuroscience. These include Maryanne Wolf’s Proust and the Squid and an excellent book of bibliographic essays Learning about Learning Disabilities which has important chapters about writing and college-level success for LD people. I’ll be posting about these texts soon.

Finally, I have begun working through the memoirs. The idea here is to find accounts of the lives of disabled people’s encounters with literacy and academic life. I am covering a wide range of cognitive or psychological disabilities, but my focus is on LD as much as possible, since very little work has been done on this condition (compared with, say, autism). To help me think more critically about disability memoir, I am using Tom Couser’s Signifying Bodies: Disability in Contemporary Life Writing (2010). I have about six or seven LD memoirs I’ll be getting to and a handful of ones on other conditions that have something to tell me about literacy or academic life for folks with cognitive disabilities. Right now, for instance, I’m reading Temple Grandin’s Thinking in Pictures, which I’ll try to post about before the end of the month.

David B.’ graphic memoir Epileptic (2006) does not focus exclusively on literacy or school life. Told in the first person by David B., a well-known French cartoonist, the memoir tells the story of Jean-Christophe, B.’s older brother whose severe epilepsy comes to consume his life. The narrative tracks the family history from Jean-Christophe’s first seizure as a child through into adulthood. Epileptic documents the family’s attempts to cure or manage his condition using western medicine, macrobiotics, faith healing, mysticism, and institutional care. Rather than simply being about Jean-Christophe’s experience of epilepsy, Epileptic shows how the entire family is affected by his condition, including how they all work together to resist social stigma of the illness. 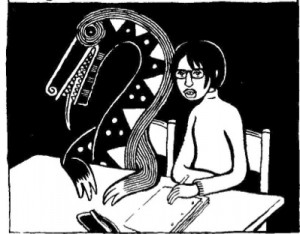 I should note here about the style of the memoir. Drawn in black and white, the style alternates between realistic representation and highly stylized symbolic imagery. One central visual metaphor: Jean -Christophe’s epilepsy is depicted as a long, spotted dragon that creeps around him, attacking him unexpectedly.

Through rapid shifts in scale and degree of realism, the memoir achieves multiple tones of voice — here’s an extended example. 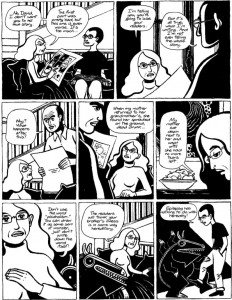 Here, in the first two rows of panels, B. uses a concretely representational style to depict a conversation between himself and his mother in the 1990s. They are discussing the memoir itself which he is in the process of writing (there are a few meta-moments like this, which always catch my interest). B. has been telling stories about his grandparents, about their lives and the personal demons they faced. Here B’s mother objects to the way he’s been telling the family history, warning him that he’ll lose his readers by focusing so much on tragedies that don’t seem to have anything to do with his brother’s epilepsy. Rather than spilling the family tragedy of her grandmother’s alcoholism, she  urges him to represent it abstractly, as a monster — the monster appears as a humanoid black dragon, similar to Jean-Christophe’s epileptic monster, swelling up to consume the entire frame. Returning to the family histories, the monster of alcoholism has become the ground on which the figures walk. 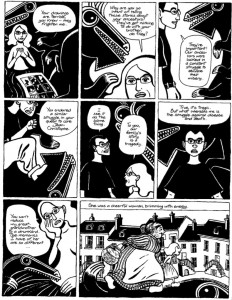 In the course of these two pages, we see the kind of stylistic leaps that make Epileptic spellbinding. The first two lines take a documentary tone, simply reporting realistically: real people in normal proportion, real furniture, it could be a snapshot of their actual home. This realism gives way to the fantastical, however, as the emotional weight of illness, shame, and despair creep in, until we’ve fully entered the realm of the unreal. The final frame shows B. using his storytelling voice, where we see these characters in tableau, like a picture book–not documentary, but instead representational, as in “here’s the way I imagine it”.

The central narrative follows the development of Jean-Christophe and David from childhood to adulthood throughout the 60s and 70s. We see David B’s development as an artist as he makes his first drawings and comics, as he attends art school, and as he publishes his first works. Parallel to this, we see Jean-Christophe’s initial interests in art and writing, though his development becomes stunted as his seizures get him kicked out of schools and moved into a less ambitious track of life. Soon after he is kicked out of a mainstream high school — because his seizures are too disruptive to the teachers and other students — he begins to attend a residential school for disabled youth. In one of his highly symbolic reveries, B.identifies this moment when his brother leaves mainstream schools and enters institutional care as a turning point: 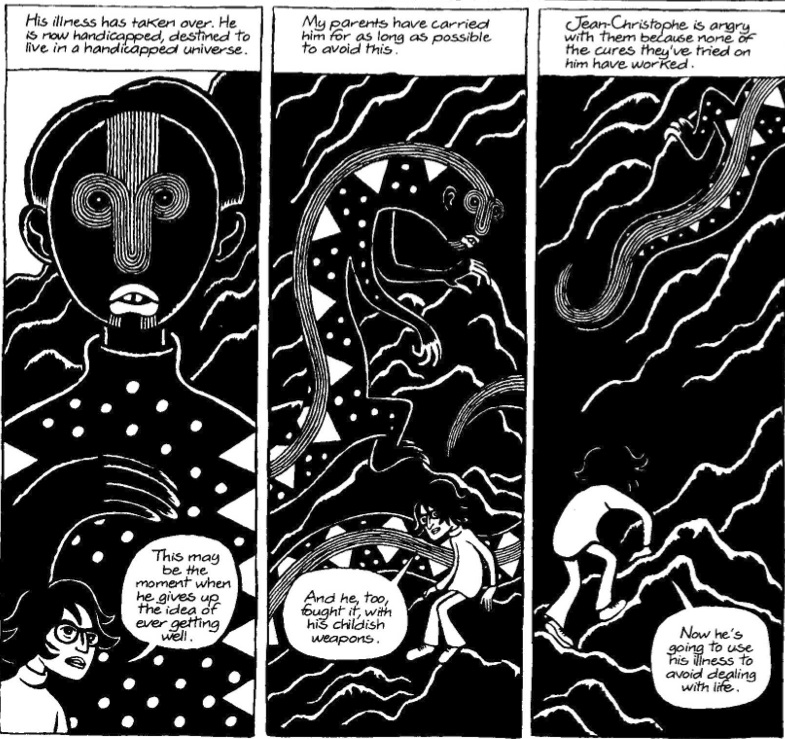 Here we see Jean-Christophe transforming into the dragon of his illness as he begins seeing himself as handicapped. B. argues that it is this moment that he loses his ambition in life. This moment is set against the background that represents the mountain of his brother’s illness, an isolating, perilous landscape that all his family members must climB.at one point in the narrative. Here, B. shows his brother becoming irrevocably isolated on by his illness, climbing higher than B. is able to follow.

This is not, strictly speaking, a disability memoir as Couser would have it. I will talk more about Couser in my next post, I think, but here I’ll simply observe that this is much more a memoir about David B’s self development and his experience being the brother of a disabled person than it is, strictly speaking, about his brother’s experience of life as an epileptic. Indeed, the main focus of the narrative is on B’s interior emotional life and his developing ability to express himself artistically.

He uses drawing to express his repressed feelings of rage, shame, and hatred that associates with his brother and his illness. By training as an artist and starting his own professional and family life as an adult, he begins to resolve some of these internalized conflicts and starts to reconnect with his brother. This progress culminates in his decision to begin writing and drawing Epileptic.

I’m not sure where Epileptic will fit in to my research going forward. Since it’s the first memoir I’m looking at, its usefulness may only become clear when I have a few more stacked on the shelf. There are certainly interesting things about literacy in here to think about. Some I didn’t mention earlier: Jean-Christophe’s interest in fascism, in dictators, in war, in opera. I wish the book talked more about his experience at the residential schools, but since it’s told from David’s perspective, it makes sense that we wouldn’t have many details about this aspect of his brother’s life. They weren’t talking much at this point. I think the most important aspect here is the way disability and illness are represented, how they are narrated: that is the challenge of invisible disability, one that all memoirists will have to wrestle with. Grandin, as I will discuss later, likes mechanical metaphors to represent her autism (tape recorders, computers, etc). David B. likes monsters, and dynamics of scale, capturing the menacing quality of the disability. I’ll think more about this as I look to the others.

Need help with the Commons? Visit our
help page Send us a message
Skip to toolbar

Built with WordPress Protected by Akismet Powered by CUNY